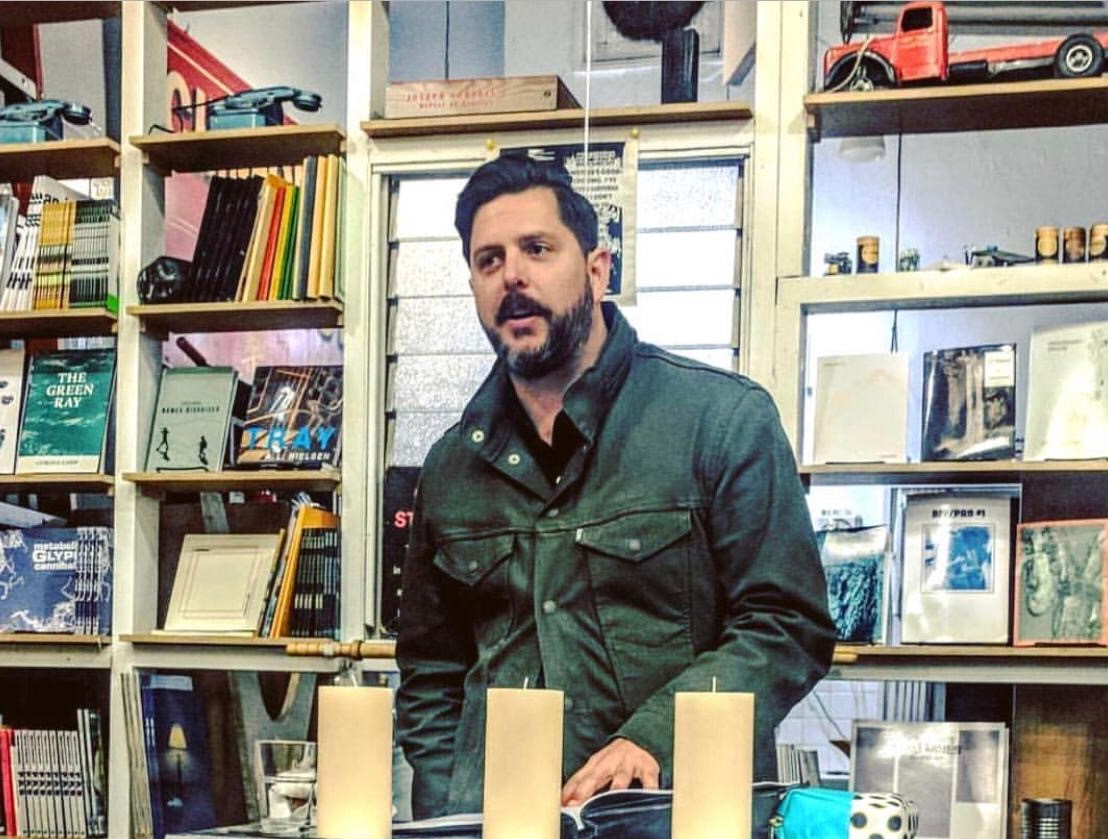 What would you say is the first form that stumped or challenged you, and why?

I wouldn’t say that any form per se has “stumped” me, but I most often write long, and/or serial poems, which present always the challenge of stamina and wayfinding. I use the long form as a mode of exploring an idea across time, as a way of joining the past and the present such that the writing through the idea, across an extended period, engenders a narrative. In doing so, the form proceeds by impulses. The challenge is remaining open to the voices that populate the poem, then following their multiple threads, interweaving them in the way the myths are interwoven in our contemporary consciousness.

Do you recall your first publication ever? Can you talk about that experience?

I can recall, but it’s not that exciting. The Red Wheelbarrow, 1999, at University of California, Santa Cruz, where I was an undergraduate student. The following two years, I was an editor of that formative magazine. I’m more interested, however, in the fate of the contemporary publishing world. For instance, my publisher for the past 9 years, Ahsahta Press, with whom I have two books, and which was one of the longest-running, most respected publishers of innovative poetry, was just shuttered by Boise State University. Still, I would have to argue that the culture of small, independent presses in America remains vibrant. I’ve learned here in Serbia that there are only a few publishers of contemporary poetry and these are not affiliated with academic institutions—libraries, yes—but rather are independent, small presses, run by small teams of devoted people. Even in cities, this is the village model. A small group pools resources to produce culturally necessary objects. This is an honorable way, but it is also, always, precarious. I’m interested in finding another, more sustainable way, both in the Balkans and in the states.

Who are some other writers that you always return to? Do you have examples that stick on your brain?

There are a number of writers who’ve shaped and informed my poetics, who have stuck with me, and to whose work I often return. Robin Blaser, Nathaniel Mackey, Alice Notley, Ronald Johnson, James Schuyler, whose Uncollected Poems I edited many years back, and innumerable others…my peers, of course. I’m also slowly breaking into Serbian poets, which is a slow pursuit, as there isn’t a great deal of their work in translation. But I’ve discovered Ivan Lalić and, more excitingly, a number of younger poets, doing exciting work now.

Does the idea of an audience ever come into play when you write? On a first draft or in editing?

Well, yes and no. Often, I feel like the audience of the voices who write my poems. My practice is to always be listening, to try and make a harmony out of the external cacophony and the many voices who speak through me. I think more about the music of the language, the way it moves in the body, and the way it might move in the bodies of others.

Writing and Wine… pen to paper/wine to lips… Does this set your imagination free?

I am an avid wine aficionado, yes, but I don’t much think of it in relation to my writing—unless I’m writing wine reviews, which I do write—but, like writing, drinking wine is an experience that engages all the senses. I can draw direct connections between my poetic practice of writing as a conversation with history and the actual substance of wine; grapes—good grapes—are the product of a specific growing season and the specific place in which they are grown, then pressed, fermented, aged, bottled, and consumed. To drink a good wine, from a good year, is to transport yourself to the place and taste the conditions in which those grapes were grown. While in Belgrade, I fell in love with the Prokupac grape—I tasted at least 40 different wines from this grape, and was enamored with many of them. But I’m back on the Dalmatian coast as I write this, and am thinking of the poetics of two particular versions of Plavac Mali from Duboković on Hvar: 2718 sati sunca u boci (2718 hours of Sun in a Bottle) and Prije 6009 godina (6009 Years Ago. Just think about the implications of the names he’s given these two bottlings. Time and place.

How is it to divide time between California and Croatia? What do you feel about this region? Belgrade?

I came to Croatia the same way I came to Serbia: as a writer in residence. I’m extremely lucky to be able to divide my time between two beautiful seaside cities, but the way and quality of life in the Mediterranean suits me better. This is where I want to be. I like to live amidst beauty, nature, history, and tension. That drives my work. I loved the constant vibrating energy and openness of Belgrade. I made friends, met writers and artists, went to art openings, exhibitions, lectures, and readings. There’s definitely more happening in Belgrade than in Split, but I also like the laid back, quiet of the coast.

Did you find your inspiration here?

I have trouble with the word inspiration. What moved me most about Belgrade was the conversations I had, the history I learned, and the genuine kindness of the people I met. America has no analogue to what the Serbian people suffered in the 90s. My own country, along with NATO, dropped bombs on the city just 20 years ago. The scars are everywhere around the city, and are imprinted on the psyches of the people—many of whom told me their recollections as if they had happened more recently—yet, there is a genuine warmth, generosity, and openness that similarly has no real analogue in America. As an outsider, I’m sensitive to it, and it isn’t my place to say much; rather, it’s my place to listen to the people and the place and learn from them.

Are there any projects readers should be on the lookout for?

My publisher just announced its closure, so I can’t now say when my next book will be out. I am, however, working on a trilogy of books, the first two of which, are completed. These are centered around a long, serial poem, “The Long Now,” much of which has been published in magazines and journals. A translator and editor of the online magazine Eckermann, is working on translating some of these poems into Serbian, so these may appear in an upcoming issue.

Your message to artists who wish to come to Belgrade…

Walk and listen. Try Prokupac. Let the city guide you.