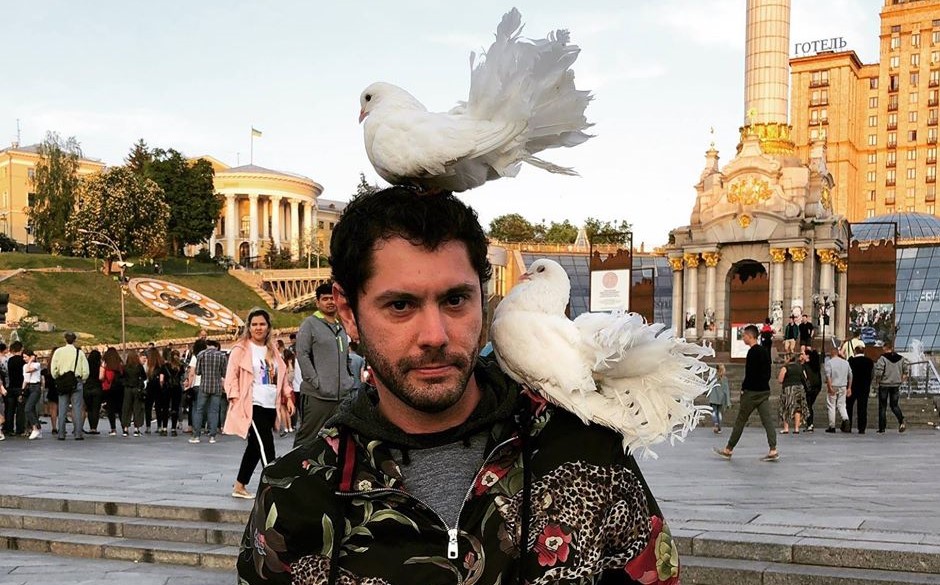 You studied art in Mexico and in the U.S.A. – When did your passion for art start?

What are your art projects about? Are there special topics that you address?

I think my art projects are always very political. They are about the systems of the world – often about the drug systems, or drugs companies. My work is a lot about the relation of governments with big companies, but also about sociology and human behavior.

What’s your personal experience of being an artist?

Well, I must say, if I could travel back in time, I’m not sure if I still wanted to be an artist. I had a lot of thoughts about it, maybe it was not the best idea, but here I am and it’s too late for me to leave…

… the artist’s life is hard, you know. It’s a long road. I don’t know, I think artists are in charge of making the definitions of every era – you don’t remember bankers or doctors of an era, but you remember the art. It’s a lot of pressure to become successful in arts. Sure, the artist’s life is very enjoyable too, but now – especially in times of the Corona-Pandemics, it seems that we are not that essential and I’m worried about all the artists in the world. I don’t think all of them will make it. A lot of them will lose their homes, as for their nonexistent jobs and their nonexistent money…

So, if you could travel back in time, which job would you like to do instead?

Oh, I don’t know… maybe I would be a doctor, haha.

How did the Corona-Virus-Pandemic affect your artist residency in Belgrade?

I had to leave earlier as I planned. And it was a mess to get out of the country, but finally I escaped on time. If I stayed until my residency was finished, I would probably have had to stay until May, because they closed the borders… so it wasn’t really my time to go, but anyways, at the end it was interesting to see all that, however it’s nothing I would like to repeat. After all, it was a “Corona-Experience” and it was pretty shitty.

Did you even get started with your art project and what is it about?

It is a media project about three things which are connected somehow:

1: The Yugoslav Ministry of Defense building, which got destroyed by NATO in 1999. That place is by now protected by UNESCO and serves as a Serbian symbol of the fight, of war times. In 2013 Donald Trump wanted to buy this building to make a hotel out of this Serbian symbol of pride, he wanted to turn it into a Trump Tower, which I find insane.

So, my art project is a combination of all these three events and how they relate to each other at some point – which is the U.S.A. and Donald Trump that are connected to these three fantastic stories that all make not much sense.

How did you come across these stories? Did you discover them while you were in Belgrade or did you hear about them before?

When I was in Belgrade, I was doing research on Serbia and stories of weird stuff they have. I came across the Rocky statue and some videos about it, that’s basically how I found out about that. Also I was researching this Ministry of Defense building, which I was very interested in and in this context I read about the fact that Donald Trump wanted to buy it – and also I remembered that he posted this picture of his and the statue. So that’s how I combined all three of those.

Did you have any struggles regarding your art project besides the Corona-Pandemic?

Yes, it was very hard for me to film the building of Ministry of Defense in Belgrade, because all the time it was full of military – so, I would go in a little bit and film, they tell me to leave, I would come back later, trying to film a bit more, they keep telling me to leave…

Are you going to continue working on that art project in “home-office”?

I did an interview online with the local Serbian sculpture artist Boris Staparac and now I have to work on the post production and the editing. But I don’t think I will do it this month, I don’t really feel like working on it, I’m a little bit tired of Serbia at the moment to be honest, but at some point I will get back to it.

I don’t think I will do any art until this pandemic ends. This situation is not inspiring and I don’t know, when I will be able to show my art to the public. My work usually includes people – it’s about doing videos with people, it’s about people, it involves people… at the moment I cannot do it, because of social distancing. I don’t paint. I don’t do sculpture. Right now it’s more like being in survival mode, so I think, I won’t be working…

What was the best experience for you in Belgrade during your short stay?

…because of the virus. It’s no fun in Belgrade when everything is closed and you can’t see anybody. I mean, I arrived on Friday and on Monday everything was shut down already. I would have stayed longer, if the city was alive, but it was dead. And I didn’t get more inspiration out of it.

But what I actually liked most were the history museums and the brutalist architecture.

Are you planning to come back to Belgrade some day?

It’s not on my plans, not yet. There are so many other places I want to experience. I think I won’t be back for a while… unless I have some work to do.

Where do you see yourself as an artist in future?

I think, I am going to start finding a way of having a passive income all the time. I can work on several stuff. I will never stop doing art, but I have to start doing some other stuff, so when the next pandemic comes, I won’t have to suffer from hunger…