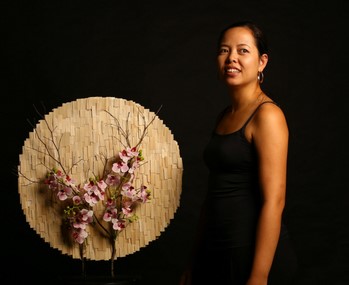 The birth and harvest of the great achievements of the Rose Cao brand is the turning point of Cao Thi Huyen. She has a stable career as Inventory Planner for more than 5 years with Schlumberger – the world’s largest energy corporation.

Studying in Singapore, specializing in Finance – Accounting is the field of study that little girl Cao Thi Huyen born and raised in Vietnam pursued. After a long period of hard work on a school campus of Murdoch University, she was equipped with a steel degree in Double Major and was recruited by Schlumberger, the world’s largest energy company, into a position to specialize in supply planning raw material for drilling rigs in Asia, Russia & Australia.

For 5 years working here, her charm with flowers started and gradually developed into intense passion. The story begins with her wanting to kill times and relax after stressful working day as well as satisfying the love interest of a girl with many dreams, she has registered to participate in professional floral design course that specialize in arranging fresh flowers, dried flowers to artificial flowers.

Step by step to success

The road to success is not easy to get, it needs to be planned from the toddler step. With the knowledge of a planning expert, Huyen feels that she should promote her talent and her name in the new caliber competitions that can bring Rose Cao far more.

Thought to do, she began submitting her design draft for the Singapore Garden Festival 2016 (SGF). This can be explained, as SGF is one of the world class garden show and is the world’s premier tropical gardening program. And more than just the designers who won awards at other famous garden shows are invited to participate in the SGF design exhibition.

Responding to the efforts of nearly five months of having to go through tough rounds, competing with many strong opponents, Rose Cao and her design contest was named in the prestigious Leaf Magazine. The largest flower in Asia. Earning the mark in the early stages, Rose Cao confidently entered the finals held at the Garden of The Bay.

Towards the origin of the offspring

After making a name and harvest successful in lion island nation. Huyen thinks that it is time to go back to make her name in her home country. 12 years in Singapore with the experience that Huyen more confidently outlined plans for the future of Rose Cao in the country of Vietnam.

Huyen once shared, “I am confident in my perception of the Vietnamese, because Vietnamese people are very skillful and always study hard, they will definitely take a big step forward when competing with other countries. In the world, the problem is only time. ”

As soon as she returned to Saigon, she immediately began to carry out specific tasks for her career development plan. With the desire to have more talented designers, besides always actively participate in the flower shows in Vietnam, Rose Cao goes into training in design, flower arrangement for passionate individuals in Saigon. Now Rose Cao has become a name that both lion island nation and Vietnam known.

The plans and success of Rose Cao or Huyen herself is a clear testimony to the statement “You will not know where you go if you do not step forward.” With passion never extinguished from the owner, believes that Rose Cao will reach even further in the future next to the plans, the big ambition.