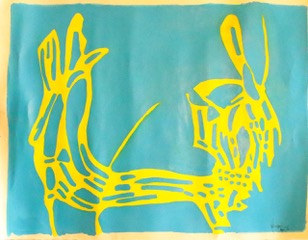 What made you decide to become an artist? Was it something you’d always had an interest in or was it just a way to escape?

It’s complicated.  Early in my childhood in the 1960’s Quebec, I was showing some artistic interests, skills and talents. However, I was born in a poor labor class family where both my parents had very little formal education. For them, an art career was not an option, and it was actively discouraged.  Despite of this, I was fortunate to go in a teaching grade school where Sherbrooke University Education Faculty would research new pedagogicals, new didactics and new curriculum to propose to the Quebec Education Ministry.

From Grade 1 to grade 6, the curriculum included several art programs developed for inner city pupils which at the time, were seen, as ground breaking.  At grade 2, we were introduced to foreign language movies such as Cocteau, Demy.  Each year, we would visit a local art museum. We would learn Jean de la Fontaine Fables. At grade 6, we were introduced to movie production where the students were in charge from the storyboarding to shooting it.

Unfortunately, my parents moved us to a different part of the city which was poorer and the grade school was using old teaching methods. When I started, my previous schooling gave me a head start when I started in middle school, I was put in the gifted learning group which meant that I could aspire to get an University education.  In the gifted section, it was expected that we would be part of the theatre club, the school newspapers or some other clubs.  My parents discouraged my participation at any of these clubs preferring that I worked in a part-time job which I did by enrolling in the army reserve.

Things looks up for me, until I had a bicycle accident at sixteen where I had a severe head concussion. My career choices suddenly were compromised, my parents discouraging me to select any career in the arts.  I went to college to become a History teacher.  In 1984, I graduated with my teaching degree, but I couldn’t find a position in my area. I was in a relationship where he discouraged me from moving outside my region with the goal to control me. Thus, I went back at University where I started a Bachelor and Master Degree in Career Counselling.

I graduated in 1993, started a Career as a Vocational guidance counsellor for people with severe mental illness.  My relationship ended freeing me to move out of the region to go in Northern Ontario, specifically in Kapsuskasing (four hours from James Bay). For about six months, I had no referral from my colleagues, used that time reading the counselling agency library, discovering my new “city” and volunteering at the local community radio. Living in a small community gave me many opportunities and beefed up my self-esteem. The agency’s executive manager gave me almost total freedom to experiment new approach in social services for people with mental illness. I was able develop a community kitchen, a leisure program, a self-help group and a buddy system program.

In 1998, my job was cut by the provincial government and I moved south where I chose to start a Doctorate in Sociology and equity in education at the University of Toronto. My course residency went very well, I was chosen to be part of world leader research team in Sociolinguistic. I started my doctorate research and started to publish research papers, to give conferences. I was climbing the academic ladder when I was infected by the HIV virus in 2001.  I experienced a severe depression where I dropped out of the Doctorate program.

From there, I experienced episodic and recurrent mental illness episodes with their cycles of job-poverty. Until, I got employed with the provincial government, a stable clerical job. It appeared, I reached some stability.

In 2010’s, a new cycle started with the death of my partner from HIV complication, my aunt, my father and my mother’s cancer. The emotional loss triggered a severe mental illness for which I asked professional help and waited nine months to see an English-speaking psychologist. By this time, I was a mess to alleviate the pain, I started to self-medicated and became a full-time drug injector addict in other words I was a junkie. The psychological process faced a language barrier which compromised my recovery, until I hit a wall and try to kill myself by jumping off a bridge. Obviously, I failed.

Down under the bridge, it took four hours for me get any help.  During this time in the ditch, I made the commitment to rise back to health, I would do it my way.

First, I had to recover from a severe back injury for which I worked hard to fix without any physiotherapy because the doctors didn’t I would benefit from it. After all, I was a junkie.  It took six months but I could walk without pain. Then, I reassessed my life, went to several detox programs, none seemed to be able to understand what it is stop injecting a drug. After failing these programs, I had enough, I started to be my own counsellor.  I developed my own recovery plan through arts.

The Toronto School board was offering several affordable basic art courses where I developed my interests and discovered that I might have some talents. I also participated to the Inside Out Film Festival Community program where I filmed my suicide which was then shown on the big screen, receiving some accolades for the courage to break the silence on addiction. When my second bronze was in a Canadian art magazine, I was hooked. I made the decision to follow an Art Career.

In 2017, I registered at Brock University at Visual art program.  My vocational rehabilitation plan has helped me to sober up but it gave me focus, purpose and meanings.  In 2020, my work was shown in Venice, my second short movie was shown in a film festival.

Until now, the career plan is working and if God is with me I will graduate in April 2023

How do you come up with an idea?

I usually have a dream about an object, an image and/or a feeling. I looked around see what has been done about it. Explored through sketching and medium exploration. Then I just do it.

What do you hope to capture and to convey in the piece you create?

A sense of loss, nostalgia, destruction and death. I am hoping that I can awaken solidarity among us to face the challenges, to change the situations.

How has your work developed since you begin studying arts and how do you see it evolving in the future?

Although, I am sixty-year-old, I am an emergent artist.  I feel I am still in discovery mode on who I am as an artist. I am still searching where to focus. If my past is my guide, there is a good chance I will be a social activist using art as it’s tool.  I also know that I will be able to develop several artistic professional layers where I can be myself.

To what extent does the pandemic influence your depiction of art? Does it generate new inspiration?

As a Visual Art Student, learning on-line art skills instead of in person has presented challenges that I have slowed down my progression to reach a more professional level.  Since the first lockdown, I am playing catch up.  Learning art is also about seeing art, as the art institutions were closed their on-line offering couldn’t replace direct observation, here again, I felt slowed down with my critical observational skills.

I went through an anger period looking at how the government was imposing these sanitary measures mainly due to the poor health care funding and years of neglect. I did several works canalising my anger. Only one was shown.

How do you feel about being involved in an on-line residency program? How important is it to stay connect with the international art community?

I see it as a great opportunity to build up an artistic resume.  It provides me with a structure to develop a professional discipline.  It’s giving me the chance to learn from others, their interests, their works and their process.  I find it’s important to develop a network as I am aspiring to become a “famous” artist.

What are your thoughts about the theme “artist on standby”? Tell us a bit more about your project?

The theme resonated to me, the pandemic forced me to reassess my career plan timeline where I had to push back by two years my graduation from the art program.  During these two years, I felt on standby not knowing if I would find the determination to accomplish my goal.

My project is entitled “of mice and Men”, it will be a one minute stop motion about the current international situation. The accumulation of crisis, we are facing and what profound social, political, ecological and financial changes are on the making. Crisis are opportunities for the better but meanwhile they are causes for suffering, loss, anger, civil unrest, and war.

What do you want to achieve in the near future? Any plans/projects?

My wish is to be a professional artist able to live off his work, reaching some notoriety possibly “fame”. In the coming months, I will have three exhibits: two collectives and one solo.  I got a small grant to produce and to shoot a short movie on trans life.  Mostly, my goal is to graduate in this coming university year.