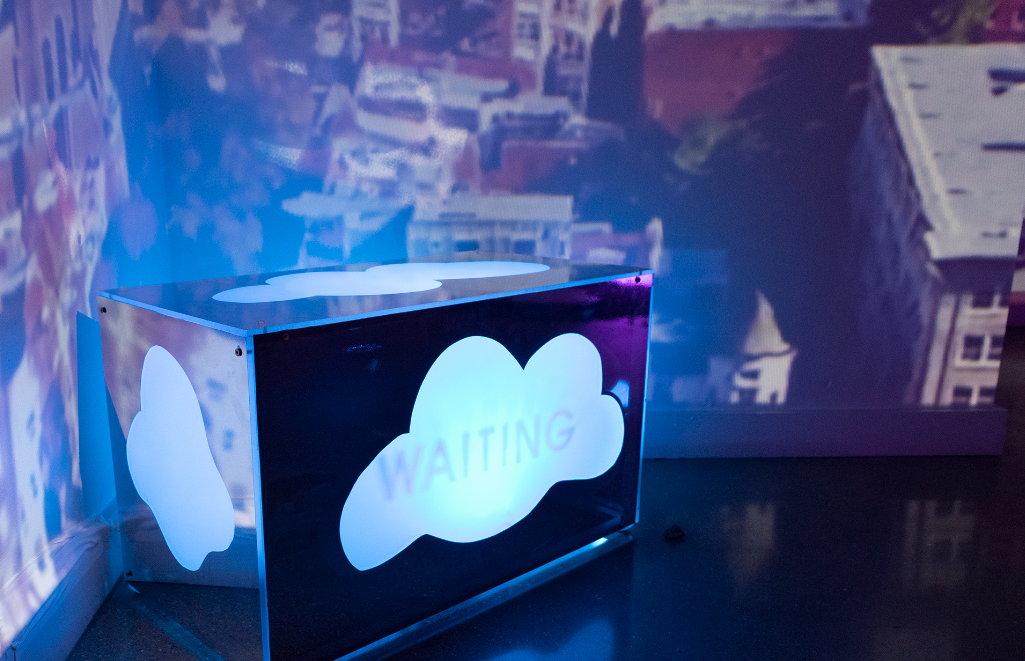 Can you tell us a little about your art and your background? How did you start getting interested in art?

I have been interested in art for as long as I can remember. I used to paint on the walls as a kid, and even turned my bedroom into an entire undersea mural installation that I worked on throughout middle school. Art was always my favorite class and my parents sent me to summer art camps so they could take care of my special-needs brother.

When I moved to Florida in 2007 I was accepted into a magnet visual arts High School where I was able to take “Advanced Placement” courses in art and art history. By my senior year of high school I think I took one academic course and then was in the art room for the rest of the day and it was bliss.

In 2004, I began undergrad at the Maryland Institute College of Art and double majored in General Fine Art and Art History (inaugural class). After undergrad, in 2008, I had to get a full time job (for chronic conditions I needed insurance) and I had been working a lot with technology in my art practice so I somehow convinced someone to hire me as a Flash Actionscript developer. I’ve worked at several art organizations in DC as a web and UX professional, but realized I was getting further away from my first love–art–with these positions, so I returned to graduate school at the Maryland Institute College of Art (again) in 2017 and graduated with my MFA in Studio Art in 2020.

What subject matters interest you? Where do you find your inspiration?

Right now one of my interests is in investigating how agency, or [roughly] our ability to make independent decisions, works within systems of power and technology.

Human behavior, everyday occurrences that are overlooked, technology, philosophical concepts, semiotics, feminism, disability culture, and comedy all serve as inspiration among other things. I am also interested in the absurd, the uncanny, and the sublime as well as how meaning is produced.

You choose different mediums. Could you tell us about the process of creation?

Sometimes the idea for the work comes to me pretty fully formed–I know what materials the concept needs for either a logistical, aesthetic, or conceptual reason. In some ways I think of myself as a vessel carrying out the instructions I was provided by my own brain.

Other times, I will work through a concept or an idea in a variety of different media and formats to see how the meaning changes. I’ve also found that I have a tendency to transform some of the images or ideas I am thinking about into a sort of symbol.

For this residency through Belgrade Art Studios, I approached it very differently. After inheriting an 80’s era sampler from an artist friend who passed, I decided I wanted to make a sound art piece that could serve as an auditory memorial for my friend. I worked much more intuitively than I have in some time.

What are some of your favorite projects you are proud to have been a part of in your career?

In April of 2022 (after 2 years of waiting since it was originally scheduled for 2020) I had the opportunity to participate in an exchange program with the University of Arts Bremen in Germany working under artist and professor Rosa Barba. I was in Bremen, Germany for 4 weeks and created new work and pushed my work in a whole new direction. I was very grateful to have had the opportunity and not only had time to research and create work but also showed my work there in two exhibitions: one in France and another in Bremen Germany.

To what extent does the pandemic influence your depiction of art? Does it generate new inspiration?

The pandemic has influenced me in being able to find ways to make due with the materials around me. I had a larger studio when the pandemic hit that I was unable to go to for several months, so I have also become a master at organizing my small studio to maximize space to make work.

How do you feel about being involved in an online residency program? How important is it to stay connected with the international art community?

I have been so excited about working with the current international cohort of artists in the current Belgrade Art Studio online residency. Getting to know the other artists and their projects through Zoom has been really refreshing–especially after not receiving a lot of feedback on my work for some time–since April/May 2022 when I was in Germany,  really.

What are your thoughts about the theme ‘artist on standby’? Tell us a bit more about your project…

The theme makes me think of suspension. The idea of bracing for something to happen that never happens. It also makes me think of those we have lost. I recently lost an artist friend who was an active member of the DC art community. I then inherited one of his keyboards–a 1985 Prophet 2000 which is a sampler keyboard. He was a mentor in many ways so I decided for my project during this residency to first learn how to use the sampler (as much as I could within the few weeks of the residency) and create a sound art piece as a memorial to him. I recorded myself making vocal noises with the keyboard sampler and then played the various keys to change the pitch and sound of the recordings. I was interested in when the sounds no longer sounded human or only sounded human for just a second. I then added some video imagery of light to go with the sound piece.

What do you want to achieve before things return to normal if it is to happen? Any future plans/projects?

I think we’re in this interesting in-between space and I hope it actually becomes more of the norm. There are a lot of things about the pandemic that were terrible including the loss of so much life, but there were some things that shifted possibly for the better. One of those things is a hybrid mode between in-person and remote/online which is more conducive to accommodating other types of bodies/abilities, lifestyles, and more. So, what I am hoping in some ways is that we never truly return to normal. I think reassessing how we make space and opportunities for others is important.