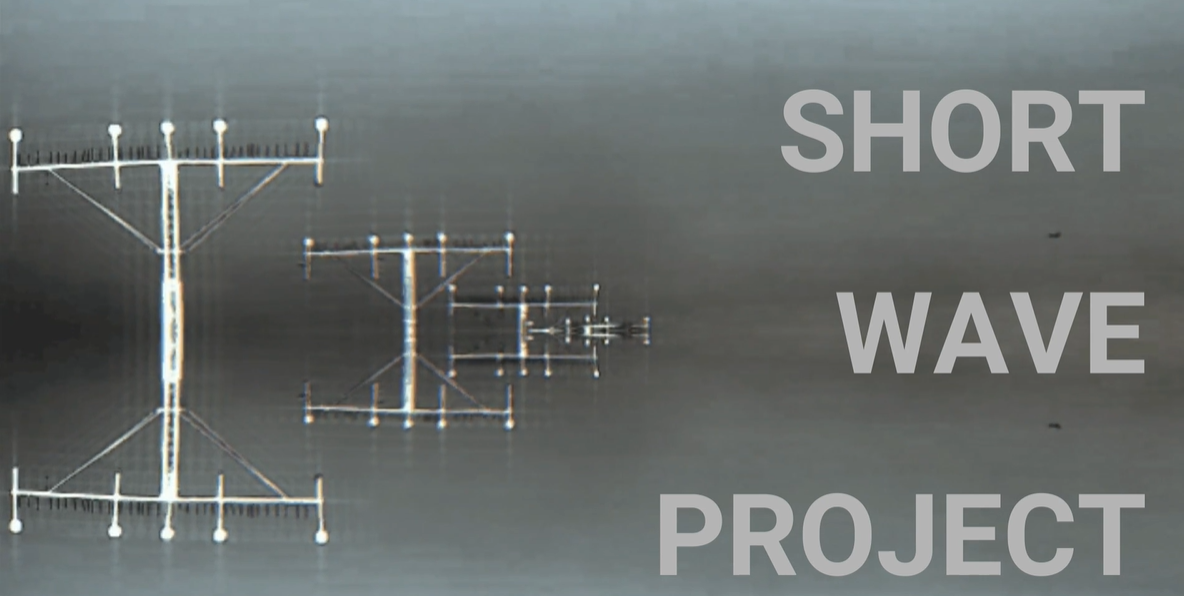 “These radio lyrics are of interest (…).

They are more effective than the common and useless

“Static between the stations. (…)

We want to capture and control these sounds, to use them

not as sound effects but as musical instruments.”

We sit down to search the radio programming for something we can’t find. We move from signal to signal, hoping that some broadcast will satisfy our curiosity to hear something meaningful. One after another, the same rhythms, the same emptiness. A single melody repeated ad infinitum. And between one signal and another, we ignore small textures that sneak in, small rebellious, crafty, anarchic signals that struggle to break through the electromagnetic limit with their bastardised and disorderly beauty, while we continue our search, while we wait for something that will disturb the programmatic monotony, the tyranny of the charts .

Radio stations replicate to the point of exhaustion the music of the market, plastic, disposable, anodyne. The mainstream of emptiness and lack of depth has transformed and colonised the planetary radio, in a context where economic interest prevails over any other human circumstance. There is no place for art in today’s radio, and if there is, it is under improper conditions.

It is under these circumstances that the critical need for the SW project emerges, a work that consists of the collection, processing and creation of sound pieces from noises generated by signals and frequencies outside the official radio spectrum and captured through multi-band radio receivers.

We can situate the SW Project within sound art[1], and more specifically within what is known as a soundscape[2], which also belongs to the family of electroacoustics[3]. I would like to add to the concept of soundscape the adjective imaginary, because my sound pieces are not the mimesis of a concrete space or time, although sometimes I use sounds that belong to concrete places or moments of reality, but rather soundscapes that recreate an imaginary space or time and that seek to manifest an abstract experience through sound. Perhaps it would be more appropriate to call them soundmentalscapes, but I’m not sure about that term as I think that concept would tend more towards psychology or psychiatry.

If we characterise the musical proposals that radio stations broadcast on a daily basis, we could conclude that the vast majority of them respond to the logic of the market, that is, they are trapped in a business model in which the most important thing is to consume at all costs. For the music industry, the pact between transmitter and receiver is based on the almost null critical capacity of its proposals. There is no room for second or third readings. There is no room for reflection. Only the excessive consumption of endless tons of totally dispensable material. The receiver does not have to make the slightest cognitive effort when confronted with these products.

On the contrary, the sense of experimentation that characterises the construction of a soundscape would come to break the perverse pact generated between radio producer and consumer, since the referents to which the receiver has been accustomed are not explicitly evidenced in the works that we can consider as sound art.

In the tradition of radio art there are some theoretical milestones, some of which this particular project takes as its starting point. Firstly, the radio work of Fortunato Depero (1892), who in his Liriche Radiofoniche of 1913 proposes, among other things, the need for a radiophony that escapes from the dominion of fashion to make room for an eminently artistic proposal. Interpreting it from a distance, we can see in this attitude a certain rebelliousness against the insipient music industry of the conservative bourgeoisie. Undoubtedly, Depero wants to reorient the radio programme spectrum. I consider his proposal, then, as a first denunciation of radio as a space in the process of distancing itself from its initial objective, which was none other than to transmit and bring art closer to the listeners. Radio, which had been born for art, was being hijacked, irremediably, by the market.

Secondly, and in the middle of the 20th century, we have the Imaginary Landscape No 4 by the composer and musical theorist John Cage (1912), in which twenty-four musicians, distributed in pairs, proceed to perform a symphony in which they change dials, raise and lower the volume, and play with the static of the intermediate frequencies. The randomness of the composition from this journey through the dial, came to establish the official radio frequencies and also the static as valid and valuable materials at the time of a sound composition. Undoubtedly, the sound of the static and the frequencies that did not tune in to regular transmissions offered a new range of sound possibilities that had an impact due to their rupturism.

These two references synthesise the tradition to which this project is added. On the one hand, Depero’s vision of radio stations as a place that has made art invisible in its critical social function, and on the other hand, the work of Cage, who used sounds and noises that were not necessarily those used for musical creation. In both authors we can see a process in which they move away from the mercantile utilitarianism of radio to make room for insurgent proposals that used radio as a critical vehicle of their time, both in form and substance. In other words, in the work of both creators there is an explicit subversion of the how to do.

In order to carry out this project, three key moments have been contemplated. Firstly, the collection of significant noises and sounds, tracked on the SW (shortwave) frequency and stored in a digital recording device. These recordings have been made at various locations and especially near bodies of water that seem to act as natural receivers and distorters of radio signals originating at great distances. After obtaining this raw sound material, I have proceeded to work on them digitally, using both analogue and digital sound processors. Finally, and with this bank of noises and sounds, I proceeded to the creation of sound pieces, which would be the creative evidence of this process.

So what this project proposes is to invert the scale of value that the logic of the market has imposed on sound creation, which has destined it to be a consumer good instead of consecrating it as an aesthetic experience destined for critical reflection. The sounds/textures/frequencies that survive in the margin are the material for a sound creation that, far from overwhelming us, allows us to experience a new dimension of the sound spectrum outside the logic of capital.

[1] Soundart: Art which uses sound both as its medium (what it is made out of) and as its subject (what it is about). (https://www.tate.org.uk/art/art-terms/s/sound-art)

[2] Murray Schafer defines soundscape as “the sonic environment. Technically, any portion of the sonic environment regarded as a field for study. The term may refer to actual environments, or to abstract constructions such as musical compositions and tape montages, particularly when considered as an environment”. Barry Truax, on the other hand, points out that “the soundscape composition is a form of electroacoustic music,(…) characterized by the presence of recognizable environmental sounds and contexts, the purpose being to invoke the listener’s associations, memories, and imagination related to the soundscape.”

[3] Electroacoustic is an adjective describing any process involving the transfer of a SIGNAL from acoustic to electrical form, or vice versa. (https://www.sfu.ca/sonic-studio-webdav/handbook/Electro-Acoustic.html).